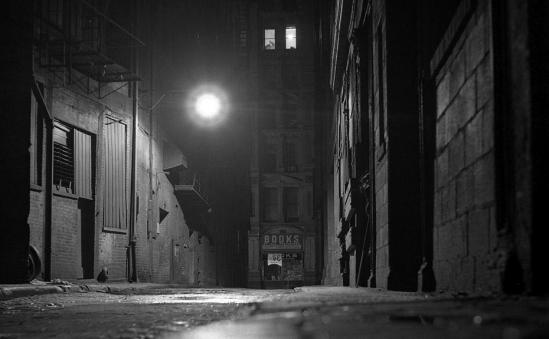 I found this photograph online some time ago and have been using it as the wallpaper on my desktop ever since.

(I can’t remember where I found it so apologies to any owners, etc.)

It’s just fantastic though isn’t it, how many stories can you tell in an alley like this?

Though it’s worth pointing out that the light at the end of this proverbial tunnel leads not to a heavenly afterlife but to a bookshop,

Be regular and orderly in your life, so that you may be violent and original in your work.

Before this thing degenerates into me completely peering up my own arsehole I should try to get it back on track, that is my attempt to promote my own writing with the goal of one day being published and having a book, or books, taking up space on the shelves of bookshops across the country. I’ve attached extracts of my own attempts at pissing into the void above.

So far I’ve completed one novel, ‘This Dirty Road’, which, as I said elsewhere, was one of the winners of the inaugural Irish Writers’ Centre Novel Fair competition.

Extracts of both can be found by clicking on the banners above.

A question that everyone who’s ever tried to write a story, poem, play has asked themselves, though they may have asked the question better.

Over the years when I’ve tried to write, I knew I wanted to be a writer, I tried many different styles, many different types of story that I wanted to tell. I’ve no real reason why I settled on what I have now. I’m no expert on literary theory and can only explain it in terms of music, though I have no musical training either.

Just to say, that’s in no way a comment on either string quartets or garage bands, it’s just the best way I can describe it. Nor is it a comment on anyone’s writing style or subject matter. I really do believe that, in essence, each of us can only write a certain way. No two people can write the same way. No two people can write the same sentence. I found crime fiction, and more specifically I found my own niche of crime fiction.

I’ve no particular interest in police procedurals, in serial killers, in CSI type analytical stories. What I love is Noir, that amorphous bastard offspring of the crime genre where failure, damnation and despair rule, and yet where the protagonists try to obtain some form of redemption through their actions, though they know that it will ultimately achieve nothing. The world will go on despite them, the bad guys will often win and the good guys, if they survive, will not ride off into the sunset with their best gal by their sides.

Noir isn’t about providing corpses for a genius detective to mull over, providing cadavers for sadistic, unrealistic and often farcical serial killers to murder in increasingly bizarre ways. If Noir provides a body it’s to serve as an example to be held up of the failings of the protagonists, the people around them, the world at large. That one person is murdered is a failing of us all. And remember, in the world of Noir there is no afterlife, there is no happy ending, you will not be rewarded. You strive, you fail, yet you continue, ultimately knowing that you will fail, but in the words of another writer, you go on, you fail better.

The farther he goes the more good it does me. I don’t want philosophies, tracts, dogmas, creeds, ways out, truths, answers, nothing from the bargain basement. He is the most courageous, remorseless writer going and the more he grinds my nose in the shit the more I am grateful to him.
He’s not fucking me about, he’s not leading me up any garden path, he’s not slipping me a wink, he’s not flogging me a remedy or a path or a revelation or a basinful of breadcrumbs, he’s not selling me anything I don’t want to buy — he doesn’t give a bollock whether I buy or not — he hasn’t got his hand over his heart. Well, I’ll buy his goods, hook, line and sinker, because he leaves no stone unturned and no maggot lonely. He brings forth a body of beauty.
His work is beautiful.

Nothing more to say really